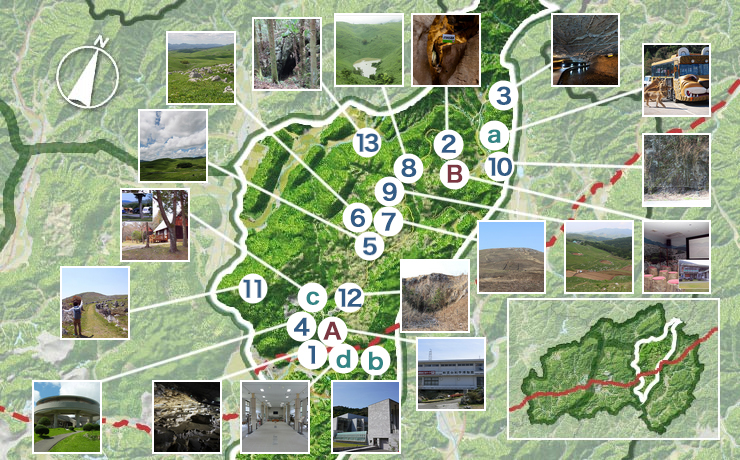 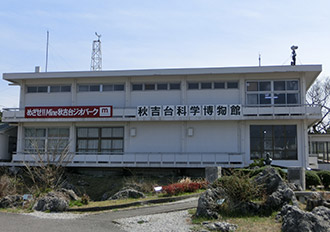 This museum enables you to learn everything about Akiyoshidai Karst Plateau, including its geological and geomorphological features, animals and plants, and archaeological findings. The museum exhibits many fossils found in Akiyoshidai, from those of small animals such as coral, fusulines and ammonites to those of a deer species named Yabe-otsunojika (Sinomegaceros yabei) and a rhinoceros species named Nippon-sai (Dicerorhinus nipponicus), as well as extant animals which live in limestone caves, such as bats. You can also obtain information about Geoparks around Japan here! 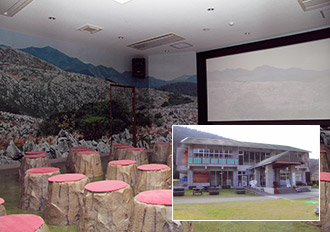 This museum introduces the geomorphological features, history and nature of Akiyoshidai Karst Plateau from various perspectives, using videos and models. With many hands-on experience sections, the museum enables you to enjoy learning about the natural environment and ecosystems in Akiyoshidai. The museum also features a faithful reproduction of the interior space of a cave. 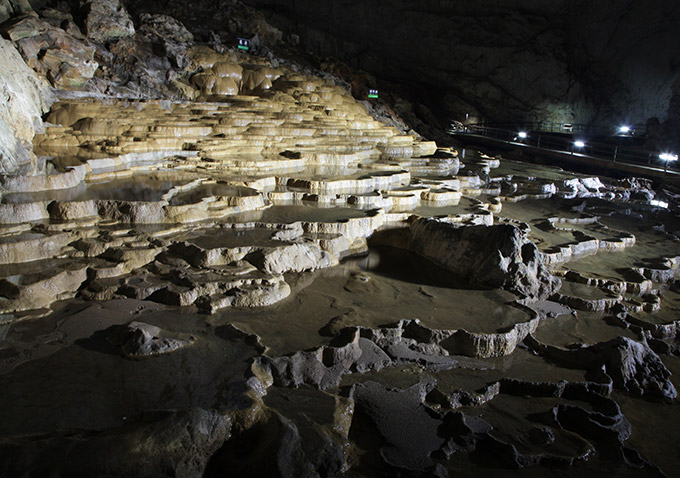 The approximately 9-km-long Akiyoshi Cave is among the most spacious limestone caves in Japan, as well as the country’s fourth longest. Located downstream along a groundwater system, the cave features a large amount of underground river water, and many cave formations such as stalactites. The cave is inhabited by species particular to caves, including a small shrimp-like species named Shikoku-yokoebi (Pseudocrangonyx shikokunis Akatsuka and Komai), as well as bats appearing in May to August. Beneath Akiyoshidai Karst Plateau, 453 underground limestone caves have so far been discovered. In addition to Akiyoshi Cave, caves open to the public are the vertically extending Kagekiyo Cave (Kagekiyo Hole), and Taisho Cave with its network-like structure. 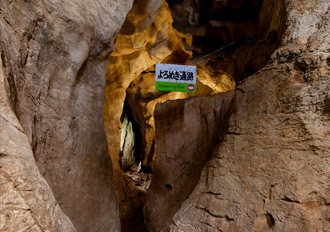 Taisho Cave, with a variation in elevation of over 100 m, features a three-dimensional structure of roughly three tiers. In this cave, you can observe various traces of the stages in the development process of the cave. Since a survey in 2014 revealed that Taisho Cave is connected to a hole known as “Inugamori Hole” underground, Taisho Cave has been recognized as the third longest cave in Akiyoshidai-approximately 2,000 m long. 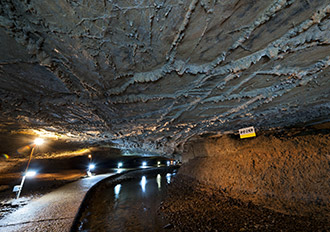 Kagekiyo Hole is a tunnel-like cave approximately 1.5 km long, with openings at both ends and a river flowing inside. However, visitors cannot pass through the cave now. You can observe patterns formed by limestone dissolving due to water on the cave walls, as well as fossils of coral, sea lilies and other ancient species. About 400 m deep along the tourist course is an exploration course, where you can walk inside the cave relying only on flashlights. 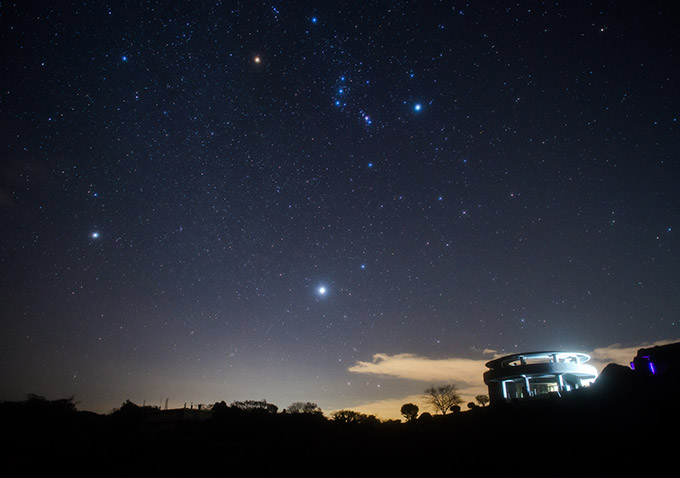 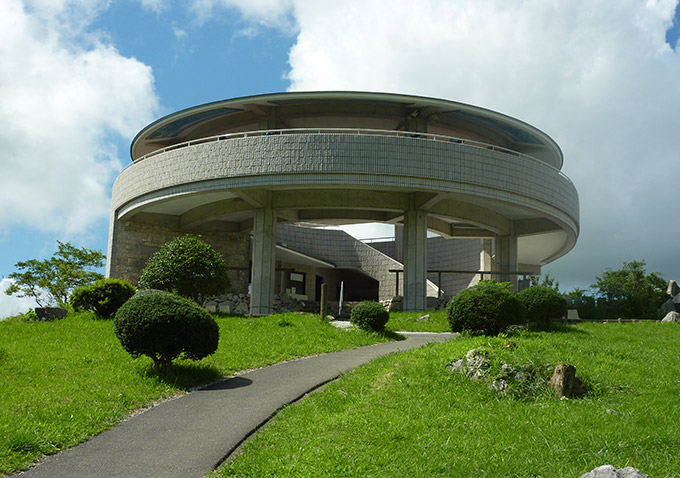 Akiyoshidai Karst Observatory is located in the southern part of Akiyoshidai Karst Plateau. The observatory offers a panoramic view of the geomorphological features of Akiyoshidai, allowing visitors to experience the karst plateau at their leisure. This observatory is famous as a spot with a breathtaking view, enabling visitors to observe the arrangement of dolines and the differences in land formation between the karst plateau and the surrounding mountains. 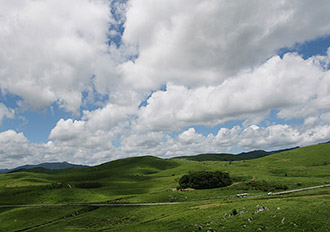 Chojaga Mori is a virgin forest comprising approximately 66 plant species. Among these species, a species named tabunoki (Machilus thunbergii) belonging to the laurel family dominates the forest, with tabunoki trees of around 16 m in height mainly covering the area. Thick with tall trees forming the canopy and understory, the forest has little underbush. It is said that the forest was named Chojaga Mori (lit. “forest of a millionaire”) in line with the tradition that a wealthy person had lived there in isolation from society long ago. 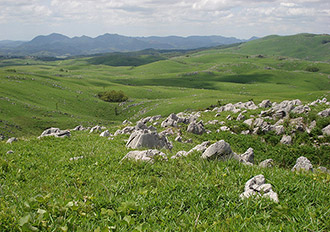 The 377-meter-high Mt. Kanmuri shows a reverse stratigraphy in Akiyoshidai Karst Plateau. Many fossils of calcareous algae, sponges, etc. found on the surface of the limestone near the top of the mountain suggest that this stratum formerly comprised animal reefs. The top of the mountain also provides a panoramic view of the geomorphological feature of karst in Akiyoshidai, including many limestone pillars to the north and many dolines (cone-shaped sinkholes) to the south. 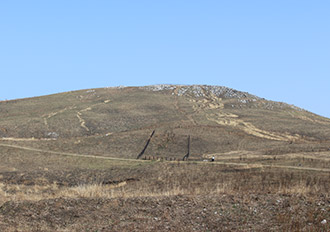 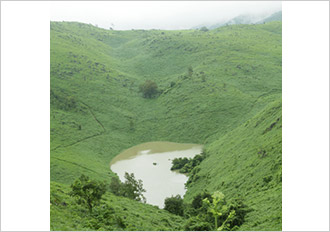 Kaerimizu is an area where limestone formations dating back approximately 300 to 260 million years are distributed along dolines. At outcrops (rock formations visible on the surface) there, you can see fossils of some kinds of fusulines, and sedimentary structure. This area was also the site of discovery of a reverse stratigraphy by Yoshiaki Ozawa, a geologist at Tokyo Imperial University (the present-day University of Tokyo). At the bottom of Kaerimizu is a spring that never runs dry throughout the year. 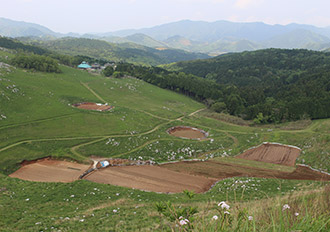 A doline farming area denotes farmland using the bottom of a doline (cone-shaped sinkhole). It is known that the bottoms of dolines in Akiyoshidai Karst Plateau were already being used as cultivated fields in the Edo Period. The bottoms of dolines are relatively flat and well drained, and so suitable for cultivation, but the farmland, which is too small for automobiles and farm machines to enter, became increasingly neglected due to farm mechanization and the increasing size of farm machines. Today, some local farmers continue to cultivate burdocks, taros, Chinese cabbages and other vegetables in some of the dolines. 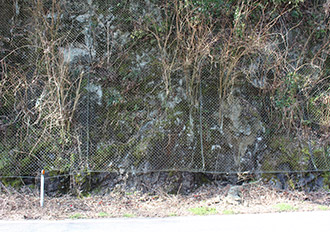 Along the road at outcrops (rock formations visible on the surface) in Miyanobaba, Mito-cho, you can see basaltic rocks dating back approximately 350 to 320 million years. A chemical analysis has revealed that these rocks were formed when a submarine volcano erupted, forming an elevation in the seabed (a seamount). At the top of and around the seamount was a habitat of coral reefs, which would subsequently form limestone. 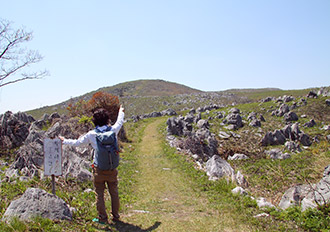 Mt. Ryugo-ho, 425 m high, is the highest mountain in Akiyoshidai. Along a fault in the mountain, you can see lines of such minerals as calcite and quartz, which were formed by magmatic activity about 100 million years ago. On the eastern slope of the mountain are crystalline limestone formations (marble), which include gravel containing fossils of branchiopods and fusulines. 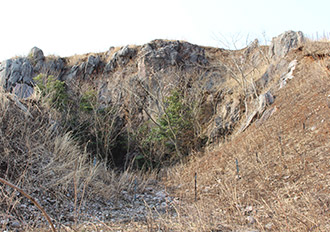 The Chojanishiki quarry ruins are the remains of a former limestone quarry. Akiyoshidai Karst Plateau has a widespread distribution of limestone formations formed under the influence of magmatic activity about 100 million years ago, including limestone around this area. The limestone was recrystallized due to magmatic activity, becoming crystalline limestone (marble). 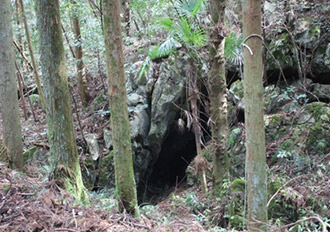 The Aokage Silver Mine was mined for 66 years from 1573 for silver formed as a result of the reaction between limestone in Akiyoshidai and magma, approximately 100 million years ago. Among the ruins, a gallery (a tunnel mined for silver) still remains, and its wall bears marks of chiseling. A village at the foot of the silver mine still maintains place names, household names and old wells dating back to the era when it prospered on account of the silver mine. 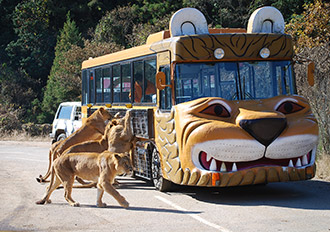 Surrounded by the natural features of Akiyoshidai Karst Plateau, Akiyoshidai Safari Land is a safari-park-style zoo that visitors travel around in their private cars or in feeding buses. Here, you can encounter around 700 animals of some 70 species, including a white tiger, which is very popular, being said to bring good luck. The Safari Land also has an amusement park, a restaurant, a souvenir store, and other facilities. 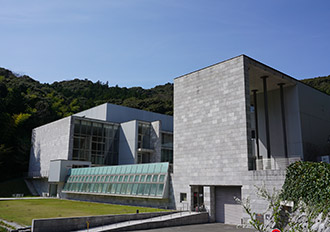 Surrounded by splendid natural features, Akiyoshidai International Art Village opened at the foot of Akiyoshidai Karst Plateau in August 1998, as a hub for the expressive, creative activities of artists from Japan and abroad. This Art Village is a residential facility for art and culture, which can be used for a wide variety of artistic and cultural activities, including music, fine arts, dancing and theater. General visitors can also stay at the facility. 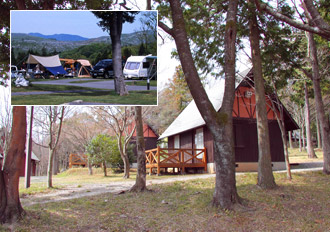 Featuring the prominent peak-roofed General Administrative Building, Akiyoshidai Family Travel Village is a recreational facility surrounded by the natural features of Akiyoshidai Karst Plateau, located in the center of Yamaguchi Prefecture. This facility is replete with features to help you fully enjoy yourself in the highland resort. It can be also used as a base for sightseeing in Akiyoshidai. 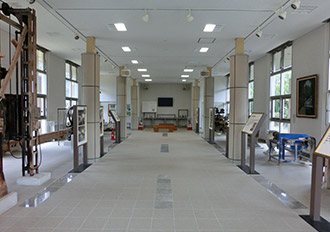 In July 1953, the Shuho-cho Akiyoshi Workshop was established as a facility for processing quality marble produced in Akiyoshidai and selling processed marble products as a local specialty, on the Akiyoshi Cave Shopping Street. The production of processed marble at the workshop grew in parallel with the increase in the number of tourists, but, to the regret of all those involved, the lack of successors and drastic changes in demand for marble products brought an end to the 50-year history of the workshop in March 2004. The Marble Processing Exhibition Hall exhibits machines that were used in the workshop.